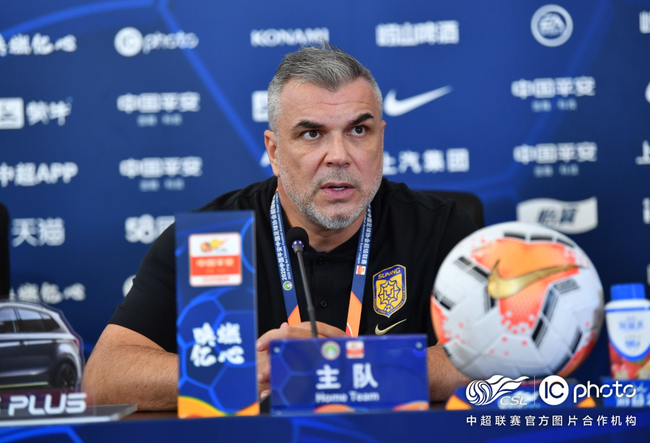 Chinese Super League APP News On the evening of September 24, a match of the 13th round of the 2020 China Ping An Chinese Super League Group A was held in the Dalian Division. Jiangsu Suning Tesco beat Guangzhou Evergrande Taobao 2-1. After the game, Suning head coach Olaroiu and Evergrande head coach Cannavaro attended the press conference to review the team's performance in this game.

Our players worked very, very hard, Evergrande was stronger than us, but we tried our best to win. Now that we have reached the goal of promotion, the next step is to focus on the game against Shenzhen, hoping that we can find the key way to win the next game. Although our players are exhausted, we still hope to find a solution.

It’s not time to relax, because the next game will be against Shenzhen. We are now fighting for second place. Our team and our players have this ability. We hope to get second place. They deserve it. Ranking.

Today should be a high-level game, but because of the venue and the weather, it is difficult for players to control their emotions. Our players did their best. We have no way to control the conditions of the venue. It is really difficult for us to organize effective passes on such a venue, so it is very difficult to play. We were not calm in the first half, because we were worried about the venue, so we made continuous long passes in the backcourt. We have two or three days left to play and we need to adjust our preparations.

Because Paulinho’s state is that the more matches the better, the greater the density of the match, the better the effect, so he will continue to start to maintain his state. After the substitution, he was satisfied. Deng Hanwen attacked from the right and He Chao scored. Zhong Yihao performed well in passing and receiving the ball and defending. We always had the offensive advantage in the second half.

The most satisfying thing about this game is that our driving force is definitely not as good as the other side. The other side definitely wants to win the game. Although we have completed the task ahead of schedule, I am still very satisfied with the team's investment in the game. In the second half, we already had control of the game. In the first half, we completely handed off. In the second half, I was still very satisfied with the players.